While now the setting for state, county, and municipal governments, it took shape in the wilderness near the geographic center of South Carolina, thus answering the demands of the populous upcountry for an administrative authority more “Centrical” than far-off Charleston. 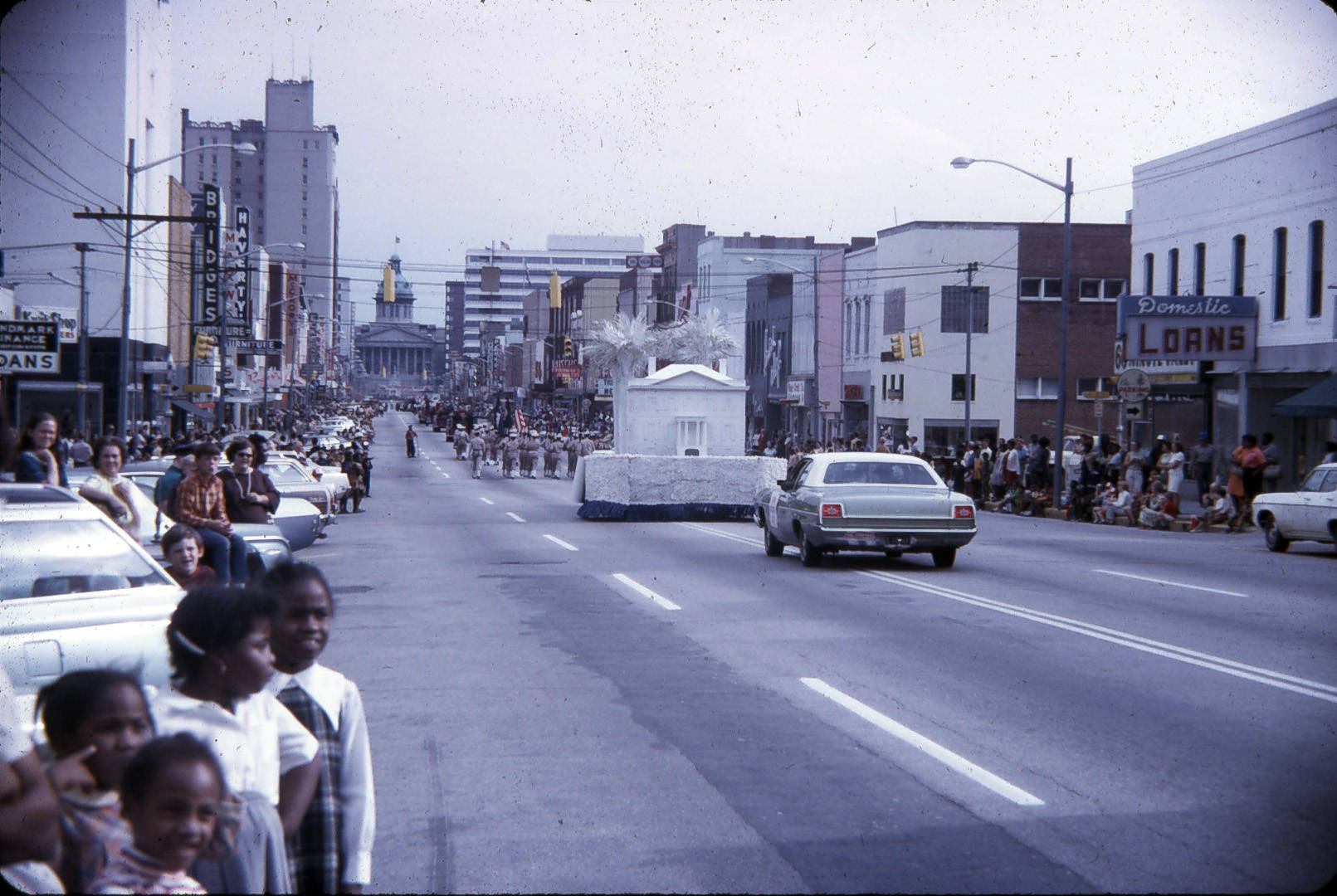 (Richland County; 2000 pop. 116,278). Named for Christopher Columbus and created in 1786 as the nation’s first truly planned capital city, Columbia has a unique history indeed. While now the setting for state, county, and municipal governments, it took shape in the wilderness near the geographic center of South Carolina, thus answering the demands of the populous upcountry for an administrative authority more “Centrical” than far-off Charleston.

After considerable legislative bickering, in April 1786 five commissioners (all of whom owned property in the area and had personal stakes in the proceedings) purchased 2,471 acres from ten individuals. This land, two miles square, was subsequently divided into a grid of ten streets to the mile, in theory establishing four hundred city blocks, with eight acres reserved for public buildings. Most exceptional, perhaps, were the proposed thoroughfares. The two principal avenues splitting the would-be metropolis into four equal parts, as well as boundary streets on the perimeter, would be 150 feet wide, and all other streets would be 100 feet in width. The street plan was a marked departure from the narrow pathways found in older communities. In subsequent years a wag said that this scheme was devised to prevent mosquitoes from spreading malaria, the assumption being that they had a very limited flight range. Although town planners often scorned the basic grid pattern as monotonous and uninspired, these broad streets later became the envy of scores of cities and a delight to residents, suburban commuters, and visiting tourists.

Lowcountry politicians were loath to see state government move inland and did whatever they could to impede this transfer of power. Sale of lots (some of them inexplicably under the waters of the Congaree) went slowly, but in January 1790 the General Assembly was able to hold a brief initial session in the new, if primitive, State House. In May of the following year, George Washington stopped briefly while en route from Augusta to Camden. Although honored at a public dinner in the unfinished capitol, the president did not lavish praise on a community he described as “an uncleared wood, with very few houses in it, and those all wooden ones.” The town, he agreed, was laid out on a grand scale. But Washington thought that it should have been located below the falls of the Congaree, thus facilitating the flow of goods and fostering trade.

These casual comments, sagacious indeed, underscored a problem that bedeviled Columbia’s pioneer generation: how to take advantage of nearby waterways to stimulate commercial development. Columbia’s growth during the first half of the nineteenth century was steady, but hardly spectacular. Aided by turnpikes, canals, and (in time) railroads, it could count some 3,000 residents in 1830 and almost twice that number two decades later. Until 1900 the black-white ratio varied from census to census, with first one race and then the other more numerous. Since that time, however, whites have predominated, although black ranks (except for the 1950s) always have registered an increase, rising to 42,837 in 1990, or about forty-two percent of all city residents. Total population peaked at 113,542 in 1970 before slipping a bit in the succeeding two decades as a result of white flight to expanding suburbs such as Forest Acres, Irmo, and St. Andrews.

As the state capital, as well as the site of its premier institution of higher education (South Carolina College), Columbia was in the midst of the political turmoil leading up to the Civil War. During the conflict the city became a vital center of military, refugee, and home-front activity, pressures that swelled the resident population to some twenty thousand, or about half that of its arch rival Charleston. Although far removed from the fighting for most of the war, Columbia suffered a cruel baptism of fire in February 1865 after the Union army of General William T. Sherman entered the city. In the wake of a chaotic Confederate retreat and Sherman’s arrival on February 17, fires broke out across the city and were quickly blown out of control by gusty winds. The following morning one-third of Columbia lay in ruins.

Despite the turmoil of Reconstruction, Columbia ended the nineteenth century on an upbeat note. For the first time in modern history the telephone, electric lights, trolley cars, rail travel, and improvements in education made town life infinitely more attractive than life in the countryside. Some movers and shakers dreamed that Columbia would become a winter resort like Camden or Aiken, but urban growth and industrialization altered such hopes. The city in 1894 became the site of Columbia Mills, the world’s first electric-powered textile mill (which later housed the South Carolina State Museum), and eventually grew into a major center of textile manufacturing. By the beginning of the twentieth century, Columbia was also home to several institutions of higher learning. In addition to the University of South Carolina, Allen University, Benedict College, and Columbia Female College (later Columbia College) exerted considerable influence throughout the community.

The opening decades of a new century were nearly as tumultuous as those that South Carolinians had just experienced—war, a disastrous economic depression, and perplexing social trends that tended to undermine and even destroy well-entrenched sectional mores. This was, of course, a Jim Crow world, but several factors softened some features of stern segregation. These included the presence of two thriving black colleges (Allen and Benedict), able leadership in the white business community, and the sound judgment of Richard Carroll, Columbia’s “Booker T. Washington,” a man whose civil rights work was later carried on by N. J. Frederick, Isaac Leevy, and Modjeska Simkins.

In 1937 Columbia won fleeting fame when university students popularized intricate steps they saw at a black nightspot, the Big Apple Club, which initiated a dance craze that swept the nation. Of more lasting impact was this community’s enduring fascination with footlights and greasepaint. The Town Theatre, established in 1919, eventually became one of the nation’s oldest community playhouses, and its efforts were later augmented by nearly a dozen regional drama venues where audiences continue to cheer the hero and boo the villain.

Founded in compromise, Columbia usually exerted a moderating influence in both local and state affairs, seeking a “middle” way appropriate for those speaking on behalf of a vague expanse of land known as the Midlands. Forces rural and urban, farm and factory, upland and coastal often have been mitigated somewhat by a conciliatory stance that remained alive and vigorous even at the end of the twentieth century.

Although Columbia embraced city-manager government in 1950, mayors such as Lester Bates, Kirkman Finlay, Jr., and Bob Coble charted a steady course in an era that often required difficult decisions. These included how to deal with the needs of a population becoming less agricultural (2,428 farms in the region in 1940; only 799 in 1964) and urban sprawl that often ignored traditional boundaries. Plans to annex some of these border upstarts in 1959 and 1960 led to a backlash and the immediate incorporation of several bedroom satellites. Temporarily, this thwarted efforts of Columbia boosters to break the 100,000 mark.

The economic surge fueling expansion was rooted in the growth of government payrolls (local, state, and federal) and reflected a proliferation of new and unusual services at all levels, as well as expansion of the University of South Carolina and Fort Jackson (the latter was annexed to the city in 1968, increasing the municipal domain from twenty to one hundred square miles). In 1980, for example, the Columbia–Richland County community had 116,637 workers over the age of sixteen. Of that number, almost one-third were government employees—21,204 state, 8,380 city-county, and 7,168 federal. That same year only about 1,000 individuals were farming.

A Washington Post reporter who toured the Columbia area in 1989 found a region rife with serendipity, neither big city nor small town, existing in an attractive, leisurely, uncrowded setting. He was struck by the broad avenues that all but eliminated traffic jams. “Turn your head briefly and you will miss what passes for the evening rush hour.” For him, this was a place where “landscape and history come together for the curious traveler.” His special joy was “an unexpected cache” of newsreel films he discovered at USC’s McKissick Museum. For others, this “special joy” might be historic homes, the award-winning Riverbanks Zoo, exhibits at the State Museum, the strikingly modern Richland County Public Library, or an afternoon spent cheering on the Gamecocks at Williams Brice Stadium.

Columbia continues to be a multifaceted community that defies easy classification. Almost from birth it was home to a college but was clearly not a college town. It built cotton mills and acquired a huge military base, yet became neither a mill town nor a “soldier” town, except perhaps in wartime. Tourists certainly have been welcome; nevertheless, their welfare never took precedence over the needs and concerns of permanent residents. Dreams of becoming a river port went nowhere, but thanks to nearby Lake Murray, Columbia became something of a “lake” city. The newsman Robert A. Pierce saw this general reluctance to be pigeonholed as Columbia’s greatest asset. The diversity made South Carolina’s capital, in his opinion, “Everyman’s city.” If nothing else, thanks to its amorphous mix, Columbia, not its satellites with their shopping malls and endless housing tracts, defines the community that observers agree is “the heart of the Midlands.” See plate 19.

A Columbia Reader, 1786–1986. Edited by the Institute for Southern Studies and the South Caroliniana Library. Columbia, S.C.: R. L. Bryan, 1986. Edgar, Walter B., and Deborah K. Woolley. Columbia: Portrait of a City.