The term “Edgefield pottery” is used to identify alkaline-glazed stoneware first produced in Edgefield District in the 1810s. 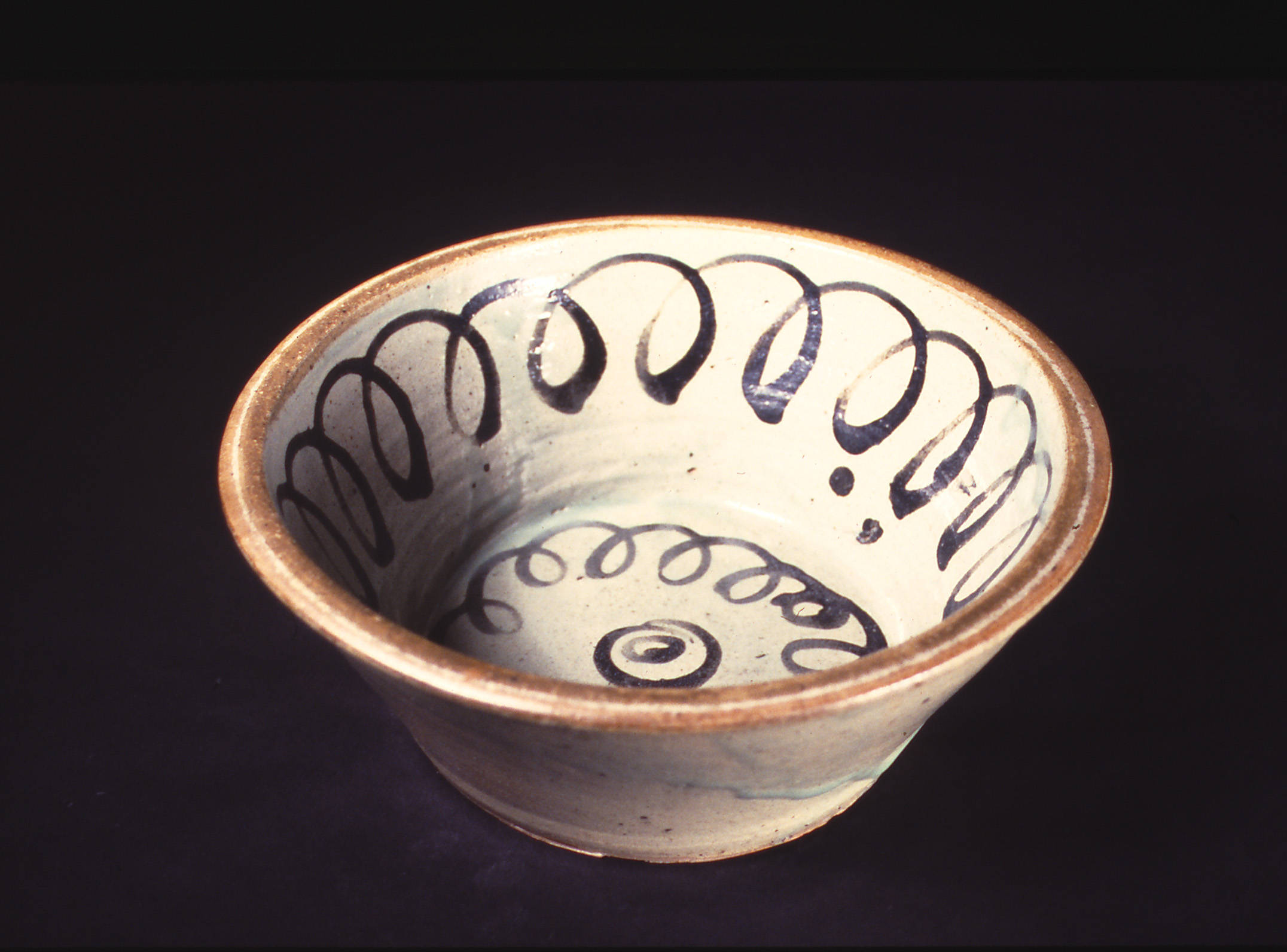 The term “Edgefield pottery” is used to identify alkaline-glazed stoneware first produced in Edgefield District in the 1810s. Edgefield pottery blends the cultural traditions of England, Europe, Asia, and Africa. Many of the potters came from English, Irish, and German backgrounds and contributed their forms and techniques, while African American slaves performed the majority of the labor-intensive tasks. The distinctive glaze (made of wood ash, feldspar, clay, and water) and use of the groundhog kiln were typical of pottery techniques used in the Far East.

By 1817 the Landrum family was the first to produce alkaline- glazed stoneware at Pottersville, thereby capitalizing on the need for low-cost, durable pottery in South Carolina and the surrounding states. Some scholars believe that Dr. Abner Landrum read the letters of Pere d’Entrecolles describing the manufacture of porcelain, while others argue that Richard Champion brought this knowledge from England to Camden, South Carolina. Up until the production of pottery in Edgefield, utilitarian wares had to be purchased from the northern states or from Europe. In North Carolina the Moravians were producing lead-glazed earthenware, but lead was expensive and poisonous. Earthenware broke more easily than the high-fired, more durable stoneware. Churns, storage jars, pitchers, jugs, plates, and cups were produced in great quantities. At the peak of production in the 1850s, as many as five factories turned out upward of fifty thousand gallons of pottery annually. The stoneware was sold statewide via wagon and railway. Most potters advertised the production of vessels holding up to twenty gallons, at a price of ten cents a gallon.

At the Lewis Miles Factory, an enslaved African American potter named Dave made enormous jars that held as much as forty gallons. Dave, who later took the name David Drake, was a literate slave who signed and dated many of his works and occasionally wrote a poem on the side, such as, “Great & noble jar / hold sheep goat and bear, May 13, 1859.”

Slip-glazed wares were produced in order to compete with more decorative ceramics produced in the North and those imported from Europe. At the Phoenix Factory and Colin Rhodes Factory, popular design motifs included bell flowers, loops, and swags created in iron or kaolin slip or written advertisements and pictorial scenes of girls in hoop skirts. Figural vessels and “face jugs” were produced between 1840 and 1880, the majority of which were made by African Americans, possibly for their own use. Major factories included Pottersville Stoneware Manufactory, John Landrum Pottery, Colin Rhodes Factory, Lewis Miles Factory, Miles Mill, Phoenix Factory, B. F. Landrum Factory, Trapp and Chandler, Palmetto Brickworks, Seigler Pottery, Baynham Pottery, Hahn Pottery, South Carolina Pottery Company, and Roundtree-Bodie Pottery.

The Edgefield pottery tradition migrated westward into Georgia, Alabama, Mississippi, Louisiana, and Texas. Inexpensive glass production and the collapse of the plantation system led to the demise of the Edgefield pottery production in the early twentieth century. Many examples of Edgefield pottery survive, however, and have become highly sought after by museums and private collectors. The tradition has attracted a high level of scholarly attention, and the price of individual pieces has reached tens of thousands of dollars.

Koverman, Jill Beute, ed. “I Made This Jar . . .”: The Life and Works of the Enslaved African-American Potter, Dave. Columbia: McKissick Museum, University of South Carolina, 1998.