For as long as people of African descent have lived in Carolina, they have made baskets. The early history of the lowcountry coiled grass basket parallels the rise of rice cultivation on the southeastern coast of North America. 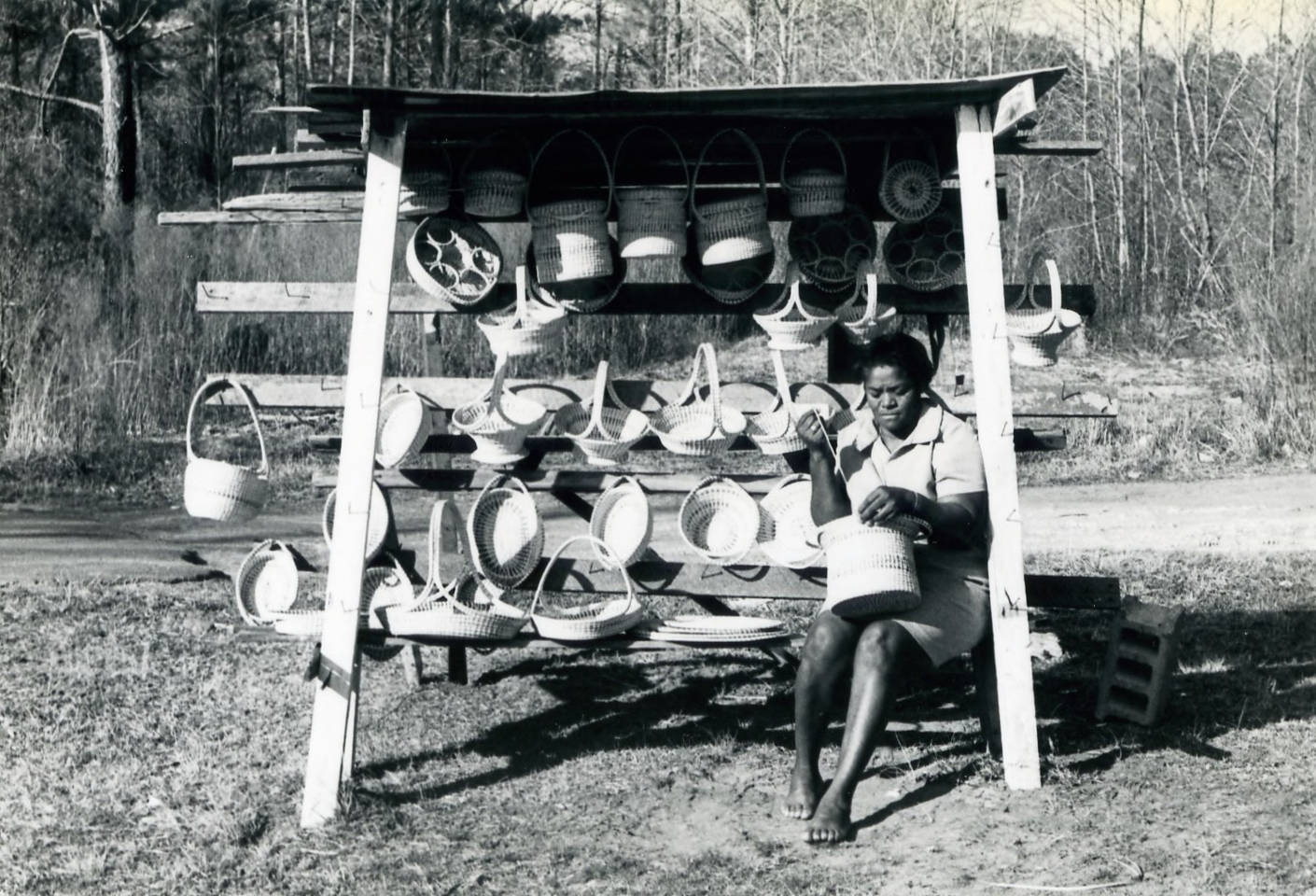 For as long as people of African descent have lived in Carolina, they have made baskets. The early history of the lowcountry coiled grass basket parallels the rise of rice cultivation on the southeastern coast of North America. The skills associated with growing rice and processing the grain were familiar to Africans, especially people from the upper Guinea coast, where Europeans saw rice under cultivation as early as 1446, and people from the inland delta of the Niger River, where rice has been grown for two thousand years. One particular basket—a wide winnowing tray called a “fanner,” common to both Senegambia and South Carolina—was essential in separating the grain from its chaff.

Like the grasslands and marshes of western and central Africa, the coastal wetlands of Georgia and South Carolina provide grasses and plant fiber appropriate for making coiled baskets. On lowcountry plantations, enslaved Africans used bulrush most often as the foundation material. To wrap and stitch the rows of the baskets together, people who lived on the Sea Islands fashioned strips from the stems of saw palmettos, while sewers on the mainland used white oak splints.

Following the Civil War, men continued to make agricultural baskets on family farms carved out of the old plantations, while women made household forms such as sewing and storage baskets, carrying trays, and “missionary bags,” said to be modeled on bags carried by the Quaker missionaries. With rice production in decline, household baskets came to dominate, and women became more conspicuous in the craft. The shift from “work baskets” to “show baskets” also meant a change in materials from bulrush to sweetgrass and from saw palmetto to cabbage palm.

The sweetgrass revolution at the turn of the twentieth century began in the vicinity of Boone Hall Plantation near the village of Mount Pleasant, across the Cooper River from Charleston. There, around 1916, a young merchant named Clarence W. Legerton contacted Sam Coakley, an elder in the black community, and arranged to come every other Saturday to Coakley’s house to buy baskets in quantity to sell retail in his King Street shop and wholesale to department stores in New York and other northern cities.

Basket production increased dramatically. With the paving of coastal Highway 17 and the opening of the Cooper River Bridge in 1929, basket makers found a way to reach their primary market directly. They began selling baskets on the roadside, displaying them on chairs or overturned crates. As the tourist trade quickened, sewers responded with new basket shapes displayed on an innovative marketing device—the basket stand.

Since the 1970s, suburban and resort development has drastically diminished the local supply of sweetgrass. The highway that once assured the survival of the tradition threatens to run the basket stands off the road. In spite of these dangers, lowcountry basketry continued to thrive into the twenty-first century. To compensate for the sweetgrass shortage, sewers reintroduced bulrush. Baskets became bigger and bolder. As symbols of a distinct African American culture, lowcountry baskets have much significance and meaning. Yet they remain what they have always been: coiled grass vessels that are useful for countless purposes.